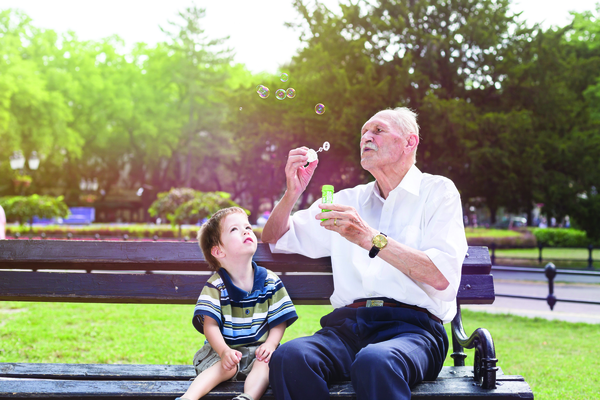 A grandchild for a day keeps dementia at bay!

Are you watching that Channel 4 programme, Old People's Home for 4 Year-Olds? I always make time to see it because I love the interaction between the kids and the pensioners.

But it's not all about the entertainment.

There are other reasons I watch.

A study by the Journal of North America's Menopause Society followed 376 grandparents and 340 children for 19 years and they found that there really are benefits to babysitting the grandkids...

The Society identified that the closer the relationship between the ageing grandparents and the children, the less likely either party was to suffer from depression.

Just think about that for a moment.

The damaging effects of social isolation can be overcome by spending time with your grandchildren.

There are some people that have already realised this.

Gransnet undertook a study and reported that 1 in 6 people had taken early retirement or left paid employment so that they could look after their grandchildren. A massive 80% said that the sacrifice was worth it, and 51% were reportedly happier when spending time with them.

It would seem then that looking after the grandchildren really does have health benefits.

And not just mentally, but physically too.

Grandparents that look after their grandchildren for one or two days per week tend to be more active than those who don't.

Even if you aren't a grandparent, you could offer your services to parents you know! The benefits to you, the child, and them, will be huge.

What do you think about these studies? Have you noticed your health improve after spending time with children? I'd love to hear your thoughts!

This is to ensure that experience using the website is the best possible. You can find out more about the cookies we use by reading our cookie declaration.

What are cookies?
Cookies are small files stored in your web browser to help the website interact with you. Without cookies, every time you visit a new page the website thinks you are a new visitor. This would mean for example shopping baskets would empty each time you clicked onto a new page. If you would like to read more about cookies , Wikipedia has a detailed article.

What if I do not want cookies stored on my browser?
You can block cookies via your web browser. You can find out specific instructions for your browser via Google. Please note though we provide no guarantee against unexpected results should you choose to block cookies on this website.