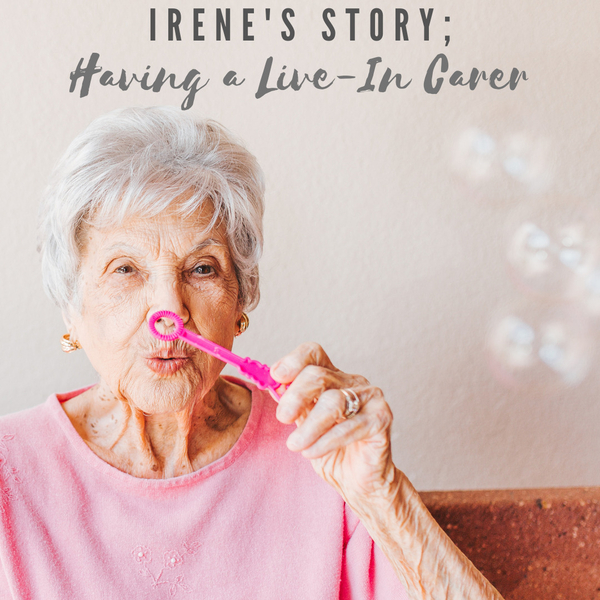 Irene's story; Having a Live-In Carer

When we first met Irene* she was a very independent 90 year old who lived alone in a beautiful bungalow in Downend. Sadly Irene's husband Denis had passed away a few years ago and with no children to offer support and advice Irene relied on her very good friends and neighbours to help her.

It was one of her neighbours that first contacted us, Irene was being discharged from hospital following a nasty fall and had lost her confidence in her ability to manage her home, after discussions with Irene a plan was made for daily visits from a team of Your Care's Personal Assistants (PA's) to help her whilst allowing her to remain as independent as possible until she felt able to manage again.

5 years later Irene's original team of PA's were still in place, visiting daily. Whilst Irene had regained her confidence and was able to manage things herself, she enjoyed the companionship and assistance they provided and decided to keep the team in place ongoing. As time went on the team noticed a significant change in her health meaning Irene was no longer able to live alone safely, after much discussion with her and her support network of friends/neighbours she decided to have a live-in carer as she wanted to remain living at home where she could enjoy watching the antics of the squirrels and birds that frequented her garden.

Irene was reluctant to have a live-in carer as she had such a bond with her team of PA's who by now were like a family to her that she did not want them to leave her. Irene was unaware Live-in carers required 14 hours break per week whereby they are able to leave the premises in order to have a well-earned break from their duties. With no family to step in to cover these breaks Irene was able to continue to receive support from her team of PA's who visited for 2 hours daily, enabling the carer to have a break and for Irene to catch up with her much loved team. Irene's favourite request was often for them to take her out in her wheelchair to the duck pond a short distance away to sit and feed the ducks, but only after her PA had helped her put on her makeup.

Does your loved one have a live-in carer?

Are you finding it difficult to cover all the breaks required?

This is to ensure that experience using the website is the best possible. You can find out more about the cookies we use by reading our cookie declaration.

What are cookies?
Cookies are small files stored in your web browser to help the website interact with you. Without cookies, every time you visit a new page the website thinks you are a new visitor. This would mean for example shopping baskets would empty each time you clicked onto a new page. If you would like to read more about cookies , Wikipedia has a detailed article.

What if I do not want cookies stored on my browser?
You can block cookies via your web browser. You can find out specific instructions for your browser via Google. Please note though we provide no guarantee against unexpected results should you choose to block cookies on this website.